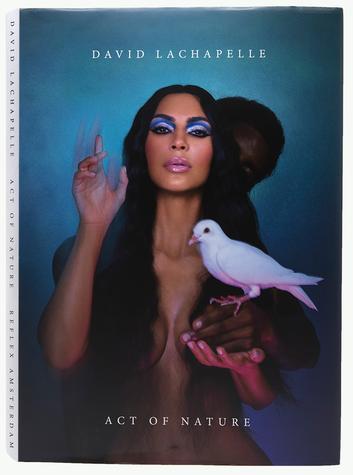 Published at the occasion of the exhibition
ACT OF NATURE
at Reflex Amsterdam 1 June – 20 July, 2019

Among David LaChapelle’s most contemplative works are also the brightest, pierced by otherworldly beams. These lights are as easily attributed to divine glow as to intrusions of earthly existence: to the flashlights of a search crew, the flashes of an emergency vehicle, stage lights, party strobes, or the halogens above a hospital bed. With their flickering, it’s difficult to keep our eyes closed in prayer.
In the absence of light disturbance, the works include other antidotes to the very spells they cast. Cordless phones, possibly low on battery, seem to ring in the middle of a silent vanitas composition of wilting flowers. A store-bought button-down shirt trespasses among the nudes of Eden. Every enchantment includes an escape hatch, a way of retracing one’s steps back from this momentary trance. Follow the breadcrumbs (or rather, the Sacramental bread) and shuffle back to the mortal coil; move from the out-of-body experience back in.

Borrowing from a color chart of American consumerism and marketing, and from signals of urgency as well as reverie, LaChapelle introduces the visual noise of man-made life into nature and rapture. LaChapelle models visions of the unknown on the extremely familiar. The artist undercuts every exaltation with a reminder of its artifice. Sometimes, he does this with humor, as when an ethereal disco ball hangs above three muses in the ecstatic Praise Dance. Sometimes with desperation, as when a table sways below prescription pills, bracketing a Pieta.
In Secret Passage, among LaChapelle’s many allusions to Greek mythology, a version of Hades’s ferryman, Charon, pulls a leafy, floral boat, in which sit four extravagant souls. These sublime humans include sculptural nudes and those dressed in formal wear, garlanded with crowns, top hats, and carnival headdress. ‘Charon’ guides them across a heavenly version of Styx, within an Eden composed of lush vegetation and waterfalls. Closer inspection shows Charon dressed in a hospital gown, with an admittance band around his wrist, the kind that might instruct: Do not resuscitate. The serene arrangement grows disturbing.

In a top hat, Charon may well be in costume, too, likewise returning from carnival, assuming an exaggerated identity like his passengers. Perhaps the admittance band is from a hedonistic ticketed event. Rather than depicting a different dimension, this vision might simply be a peek around the corner. The image lives in this tension between humorous and sobering. Unlike a memento mori, meant to remind mortals of death, LaChapelle’s work often reminds of those darker aspects of life — of human fallibility while still among the living.
Charon raises his finger to his lips, hushing the viewer. And so, the viewer participates in shrouding the passage in darkness. As frequently happens in LaChapelle’s work, as in mythology and religious allegory, a human’s arduous search for godlike knowledge most clearly demonstrates its absence. Charon’s passengers, even if entering a new world, are victims
of an unknown fate.

Reborn! Nature’s Transfusion digs into a similar abyss. As suggested by the title, the image depicts nature resuscitating a human, with trees giving new blood to a prostrate body. But the composition’s centerpiece is, nevertheless, a hospital gurney (a recurring symbol, a bleak memento vitae). Below it is a bedpan: the human cure for hubris or ego. A bright light pierces from a clearing in the wood: perhaps it belongs to that folkloric and celestial tunnel at life’s end. Or, more practically, to the beams of an ambulance. Least romantic of all, its source could well be an incandescent tube used to light a dark set. LaChapelle sometimes leaves the dust of production purposefully unswept. This may simply be dress-up, the work seems to say... Or this may be it.

In Self-Portrait as a House, LaChapelle explicitly reveals the soundstage behind his set. In doing so, he exposes the paradox of public acts of private introspection. Even the deepest secrets in the attic —Self-Portrait’s ‘baggage’— have been arranged for the camera. Private prayer, a closeted laptop viewing, even the cotton-candy insulation of this single-family home: all on display.