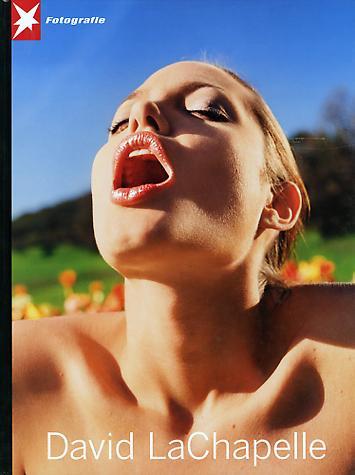 Excerpt from the critical essay, “The sculptor of pop” by Jochen Siemens:

LaChapelle himself says that the applause his pictures receive is deceptive. In them, he says, it is impossible to see the antagonism and annoyance he often felt when asked to do a “real” LaChapelle or when celebrities leave everything to him and in the end want something else. When Vogue in Italy asked him to do a fashion shoot, everybody expected him to deliver the expectable – a photographic circus with a few nudes, a few freaks and anything else his surrealist fantasy might come up with. And what did he do? He got the models to pose in front of some houses ruined by a storm. No irony, no sex, just a brusque reference to “the ecological disaster of climate change”. Horrified reactions at the Vogue offices in Milan. “What’s the point of the ruins? Can’t you do the pictures you did five years ago?“ “No, I can’t. I’ve moved on artistically.” It’s always been like that, he says: “Magazines want me to do the stuff I was doing five years ago.”

Hip, trendy, avant-garde – none of these terms strike true when you look at LaChapelle’s work. Unlike many other photographers who find their own style in the works of others, he is no eclectic. In his pictures there is, if anything, just one recognizable school and one source of inspiration: Andy Warhol’s “Anything goes” and the creative rage of Federico Fellini.