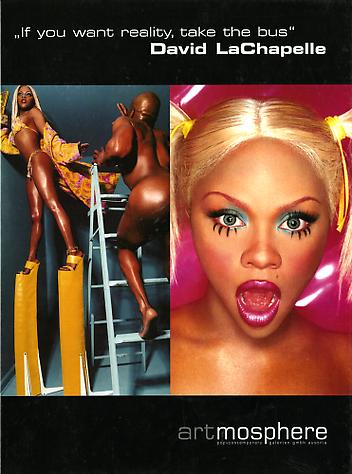 If You Want Reality, Take The Bus!

Excerpt from the critical essay, “If you want reality, take the bus David LaChapelle” by Alfred Koblinger

David LaChapelle –the name derives from French forefathers –was born in 1964 in Connecticut. David grew up with his brother and sister and a mother who turned stage managing photos in a family sport. “ We produced an enormous number of photos. My mother decided the scene and could spend house on the styling. When I was still really small, she built me some angel’s wings out of paper –really detailed with feather and things. And that’s how I was photographed”.
Later, the LaChapelle family moved around from one town to another till they finally settled in North Carolina. “It was a shock, nothing was like it was in Connecticut”. He admired those women with giant hairdos, long eyelashes and rose-coloured fingernails. And he still remembers a scene, in which one of these women in hot pants and halter top came down to the street and smashed her husband’s brand new Lincoln with a hammer.