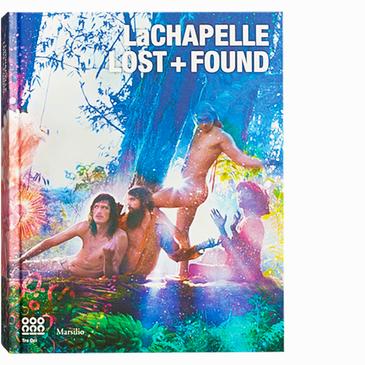 David LaChapelle's colorful and provocative work has been a permanent fixture in the history of photography for more than three decades.
The exhibition Lost + Found follows the idea of showing LaChapelle's work in a comprehensive way, but also focusing on his more recent and serial groups of works. The artists's early period in New York City in the 1980's is presented as a condensed retrospective based on the New York exhibition of his black and white series Good News for Modern Man in 1984, which was a starting point for his characteristic portraits of well known personalities. The selection of works from his artistic origin is comprised of this non-commercial black and white series and his most important commissioned works for fashion magazines, in whose eccentric and imaginative compositions LaChaelle choreographs a colorful works of beauty, creative madness, and criticism.

The main part of Lost + Found consists of David LaChapelle's extensive serial works addressing a wide range of specific topics. Already in 2006, he deconstructs his formal idols from the glamorous world of celebrities. Works such as the series Still Life (2009-2012) of the family portrait of the Kardashians (Showtime at the Apocalypse, 2013) portray the fragility of a world of glamor glorified by society and question the meaning of fame, status, public representation and the power of money. The Negative Currency project (1990-2008) also focuses on these issues and anticipates the financial crisis and the fall of the US investment bank Lehman Brothers. Here, too LaChapelle's sensitivity and his seismographic talent reflect the moods of society.

In his works, David LaChapelle stages elaborate, fantastic scenes that are smartly laced with ironic and satirical exaggerations. This concept also encompasses an awareness of the power and the magical effect of images, both of which LaChapelle applies in order to create an attractive desirable world of beauty, light, and color. A further component of LaChapelle's oeuvre is the photographic treatment of classical subjects of art history, such as the Renaissance painting (Earth Laughs in Flowers, 2008-2011) and the transfer of its aesthetic features into the here and now, or the representation of scenes from the New testament Gospels in the series, Jesus is My Homeboy (2003). These are just a few examples of LaChapelle's artistic exploration of the world and (art) history. David LaChapelle takes up existential, fully human themes throughout his conceptual groups of works- particularly with regard to longings, spirituality and desire, concern for the vulnerability of our planet, as well as the question of its preservation in the time of mass consumption. Land Scape, for example, urges the critical use of fossil resources and, in interaction with the series Gas, confronts us with the power of nature, which in the end will outlast humanity.

Questions of faith, the meaning of life, and the importance of nature, have accompanied David LaChapelle throughout his life, now reaching a climax in his new group of works, New World, presented here for the first time. New World explores the longing for intact nature and spirituality in the world today. In this work, spirituality is understood as a process of reformation, meaningful activity and blessed experience- unfolding particular meanings and possibilities through natural interaction with the pictured, fantastic protagonists in the enchanted rain forest of Hawaii. New World is a colorful, cosmic fantasy, an exotic dream, a place of longing freed from alienation, in which a deep connection with the spirit of nature, and an active closeness to fellow human beings seem truly possible. The depicted figures in LaChapelle's photographs seem to know that there is much more than what is revealed in the immediate visible world.

New World presents the moods and secrets of mind and faith that are inextricably linked to living nature. The desire to enable the viewers to have natural and direct access, to give them confidence in an independent, intuitive perception has always been very important to LaChapelle. With his images, he formulates a claim both to viewers' sensibility and to what the images themselves communicate. The beauty of his works becomes a bridge and a link leading to the viewer to the core criticisms of society, which are concealed behind this very beauty.

The comprehensive exhibition at Casa dei Tre Oci in Venice shows the crucial developments in David LaChapelle's oeuvre and presents him as an artist who is closely connected with life, humans and nature and who fulfills the desire to sensitize for existential topics in a masterly way.