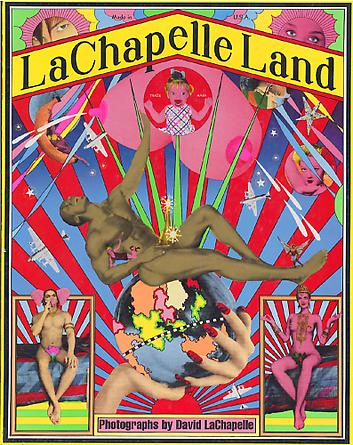 Simon & Schuster in Association with Callway

All images, no text.

Publisher's Note: "The acclaimed Book of 101 Books: Seminal Photographic Books of the Twentieth Century recognizes David LaChapelle's 1996 LaChapelle Land as its 101st book. And rightly so. The marriage of LaChapelle's vivid, high-octane images with graphic artist Tadanori Yokoo's supersaturated designs make for an astonishing physical object.'There's a tradition of celebrity portraiture that attempts to uncover the 'real person' behind the trappings of their celebrity. I am more interested in those trappings,' says LaChapelle. Indeed, he exaggerates the artificiality of fame and Hollywood culture in a head on collision of color, plastic, and whimsy. His photographs confront our visual taste and challenge our ideas of celebrity, all the while taking us on a roller coaster ride through his hyper-sensationalized galaxy. Lil' Kim becomes the ultimate status symbol, tattooed in the Louis Vuitton pattern. Madonna rises from pink waters as a mystical dragon princess. Pamela Anderson hatches out of an egg; and Alexander McQueen burns down the castle dressed as the Queen of Hearts.David LaChapelle's uncompromising originality is legendary in the worlds of fashion, film, and advertising. His images, both bizarre and gorgeous, have appeared on and in between the covers of Vogue, Vanity Fair, Rolling Stone, Vibe and more. LaChapelle Land is fun park America gone surrealistically wrong - but in such an attractive way. David LaChapelle's photos have appeared in Vanity Fair, Details, French Vogue, The Face, Detour, The New York Times Magazine, Arena, and on MTV. The images [LaChapelle] creates are part sex, part satire, part fantasy--in a word, outrageous. This 'mind-blowingly lavish compilation' features portraits of Drew Barrymore, Leonardo DiCaprio, Faye Dunaway, Andy Warhol, Tupac Shakur, Smashing Pumpkins, and many more. Packaged in a beautiful box designed by the legendary Japanese graphic artist Tadanori Yokoo, this book offers a truly entertaining visual experience."